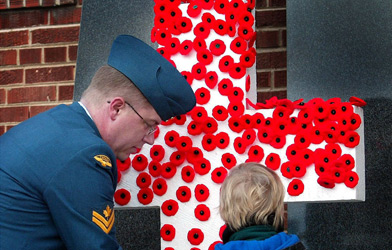 Seeing how November is a month of Remembrance (November 11th) we talked about what Remembrance was and how long it would last. Subsequently we discussed posters in relation to World War 1 (WWI).

So the first question I think is what exactly is Remembrance Day? Well on the second Sunday of November at 11am men, women, and children around Britain hold a two-minute silence. This time is dedicated to remember those millions of people who died in the WWI.

I then thought well why the poppy? This is because it was a unique plant that grew plentifully on the battlefield where WWI took place. It flourished due to the chalk soils which became rich in lime from the intensive bombardment. A few weeks after the war the battlefields thrived with the colour blood-red, not just from poppies but from blood which had been spilt from the dead.

In 1915 the poem ‘In Flanders Fields’, John McCrae, was published and became one of the best known poems of WWI.

In Flanders fields the poppies blow
Between the crosses, row on row,
That mark our place; and in the sky
The larks, still bravely singing, fly
Scarce heard amid the guns below.

We are the Dead. Short days ago
We lived, felt dawn, saw sunset glow,
Loved and were loved, and now we lie
In Flanders fields.

Take up our quarrel with the foe:
To you from failing hands we throw
The torch; be yours to hold it high.
If ye break faith with us who die
We shall not sleep, though poppies grow
In Flanders fields. 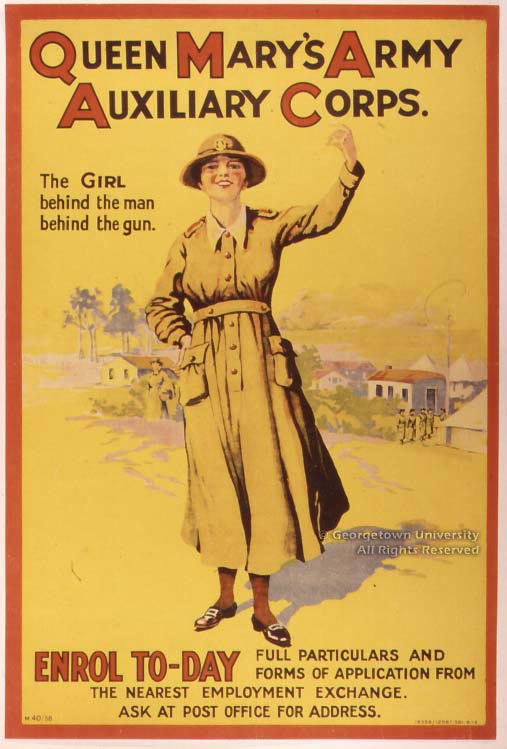 In my opinion, the British posters were better. They were simple, encouraged men toenlist and convince women to stay home and work. However, even though German posters were more religious based, mystical and more aesthetically pleasing, they lacked the true message: that it was important for men to fight for their country.

Thus, British War posters were more successful due to being straight to the point and perhaps through the visual language portrayed through them.

The line ‘Your country needs you’ was the most famous and iconic of phrases in the British Army Campaign. It is a portrayal of Lord Kitchener ordering men to enlist in the war. Being a member of the military, Kitchener was appointed the task to enlist a large army to fight Germany. I believe this poster was so successful due to the demanding finger pointing and the words ‘YOU Join Your Country’s Army!”. It involves the viewer and makes them feel like Kitchener is talking to YOU individually. Its bold red lettering, in addition, is striking to the eye and can be seen from afar. The result: More than 3,000,000 men volunteering to go to war in the first two years. Success. 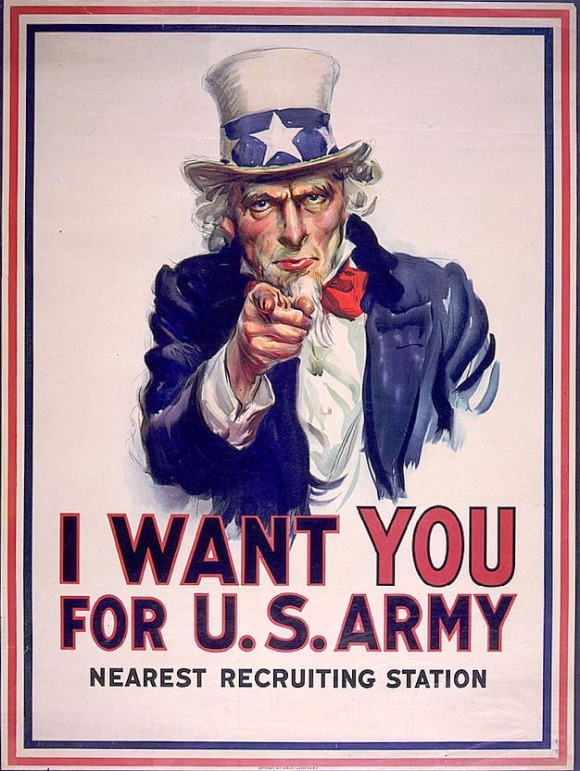 This poster was based on the original Kitchener poster. Uncle Sam is actually a fictional character. It is one of the most popular personifications of the United States.

It is a shame though because nowadays you can see people in all kinds of adverts doing the ‘finger pointing’. The idea is becoming de-valued and unimportant.

(Daddy what did you do in the Great War? Savile Lumely 1915)

The scene here is the daughter is reading a history book about war and the son is playing with his toy soldiers. The daughter asks her father: ‘Daddy what did you do in the Great War?’ The father is looking at the viewer. What does this suggest to you? What is the expression on his face? Is he directing the question at you? To me it looks like he did not actually take part in the war. He did not enlist because he should not even be in the house looking after the children – that is the woman’s role. Thus, he did not do his job for his country. Maybe the father thought that only the poor working class people should fight. I believe this is NOT the case. That is unfair. This reminds me of a previous lecture where the woman takes the domestic interior role (doing the dishes, looking after the children) whilst the husband takes on the exterior role (work). But in this poster that is not the case. It is WRONG. He should be at war.

A very important message is emphasised through visual language here: that it is not just the working classes who go to war, it is everyone including the rich.

In conclusion, posters were important in the 19th century to encourage men to enlist and women to take on the men’s role of working the land.